Before leaving Colorado, there was one last thing we really wanted to visit: the New Belgium Brewery in Fort Collins! They get a lot of visitor out there and you have to make reservation on the company’s website. This is why our visit was scheduled for 11h30 A.M. on a Tuesday! We had a great visit at New Belgium. Our guide was nice to us answering all questions. Plus, she promised that, on their next meeting, she would bring up the subject of selling their beer in the Province of Quebec! 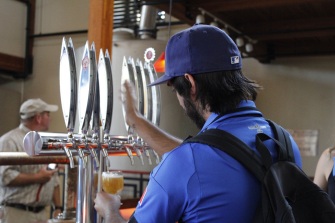 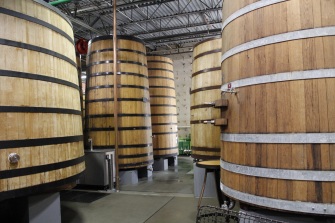 At the New Belgium brewery, we learned (again) the process of making beer and how this beer brand was created: a local electrician who was making his own beer in his basement decided to become a brewer after he visited Belgium. We tasted many beers but our personal favorite was the: La Folie.: a sour beer that is aged in red wine barrels. The New Belgium brewery is well known for its bicycle logo. After you’ve been working for a year at the brewery, they offer you a bike! Each year, the bikes are different. We are recommending the visit! 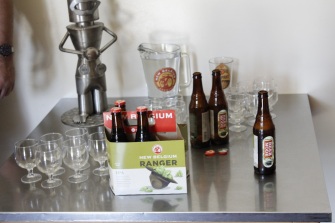 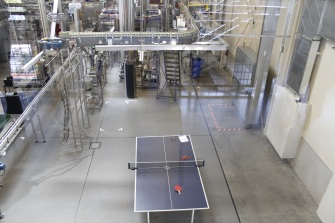 We took the road towards Kansas City and we ran into a wind and thunder storm. We felt like we were living the tornado scene in The Wizard of Oz! The temperature was hotter in Kansas then in our previous destination but we managed to sleep while dreaming of the next night we would spend in a hotel (it’s about time we get a shower!). 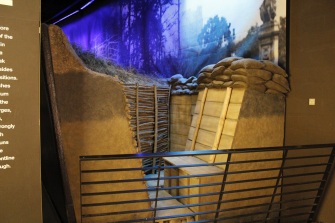 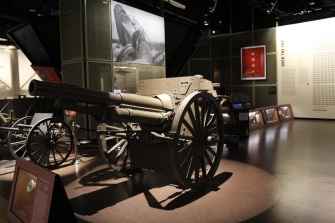 When we got to Kansas City, our first stop was the World War One museum. Adry and I both followed the World War one class back at University of Quebec in Montreal so we were both excited about this visit. To get into the exhibits, you walk on a glass floor and underneath you can observe poppies, flowers of Remembrance Day. The museum is great and sober. We could find everything related to WWI: weapons, artillery guns, nurse’s kits, pictures and trench replica. We advance through the years of the war following the different characters that lived through it: soldiers, family of the victims of the Lusitania, journalists and civilian in Europe. We finished off the tour with the Pantheon de la guerre and the Liberty tower that gives us a great view of Kansas City.

We checked in at the hotel: we really needed that night indoor! Good news for us: we were walking distance from Kauffman Stadium. This ballpark, which opened in 1973, is located right next to the Arrow Head stadium, home of the Kansas City Chiefs (NFL). 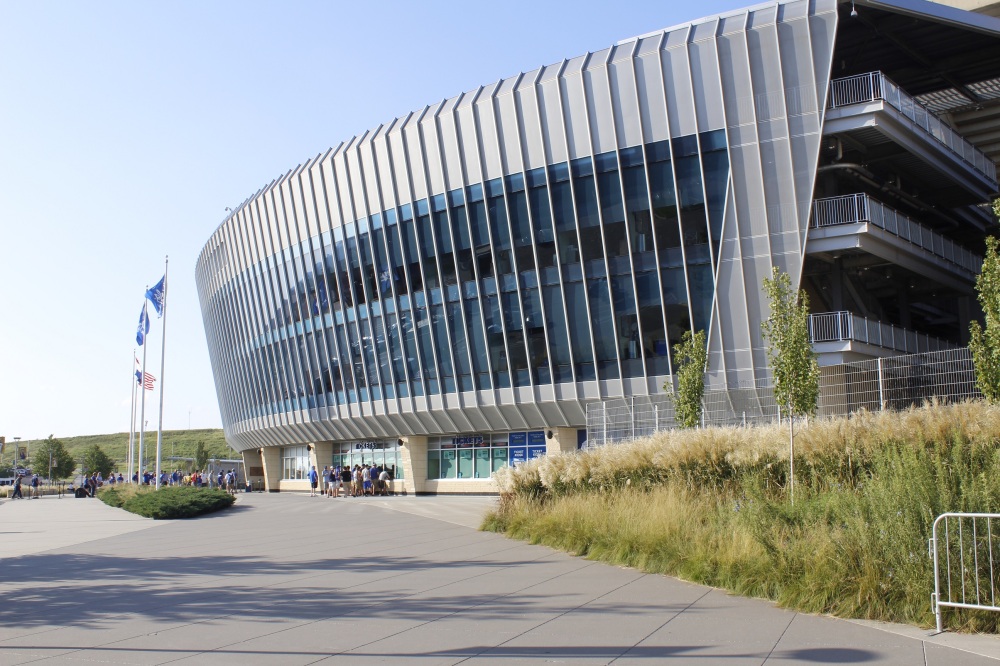 At the ballpark, we had the chance to meet with David Kettlewood, tickets sales manager for the Royals. David was one of the first to reach to us when we launched our project of going to all 30 ballparks. He told us about the attendance at Kauffman Stadium. The Royals, who are having a good record this year, are still struggling to get fans to the ballpark on weeknights. Good news they do get pretty good attendance on weekends. The Royals have a limited fan base: Kansas City is not the biggest city in the United States and it is surrounded by smaller cities. David offered us some great tickets for the game and he even gave us some Royals t-shirts! Big thanks to him! 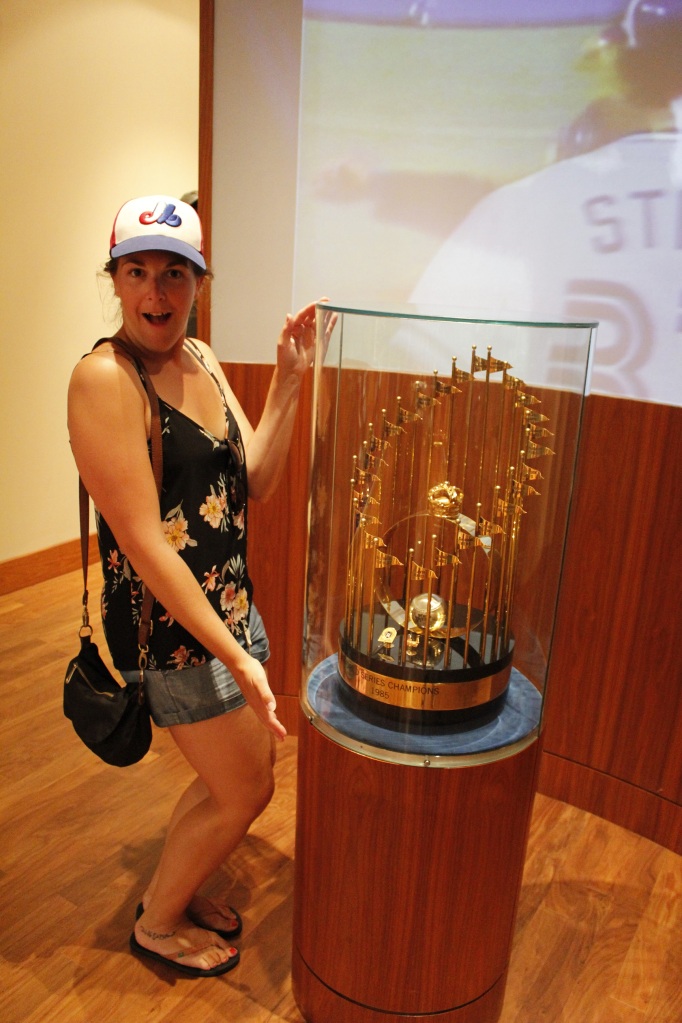 The Kauffman Stadium, which has a style similar to Dodger Stadium, lived some important renovations from 2007 to 2009. Those renovations give the ballpark a fresh blow so it could be more modern and more oriented on the fan experience. We started off with the Royals hall of fame museum. After watching a 15 minutes movie about the history of baseball in Kansas City, we walked in the museum to see the 1985 World Series trophy and many baseball memorabilia. Fans can visit the ballpark from gate opening to the 8th inning. 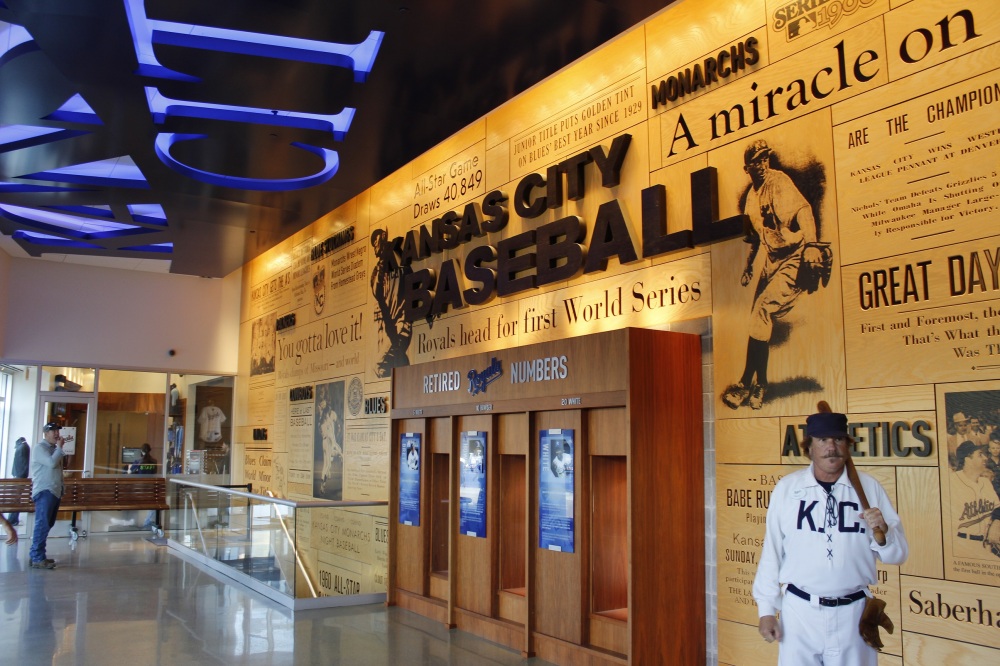 We continue by walking around the ballpark to see the kid’s zone: a whiffle ball field, speedometer for pitches and a carrousel! Not too far from there, the Budweiser patio: a bar\terrace that also hosts the TV postgame show. 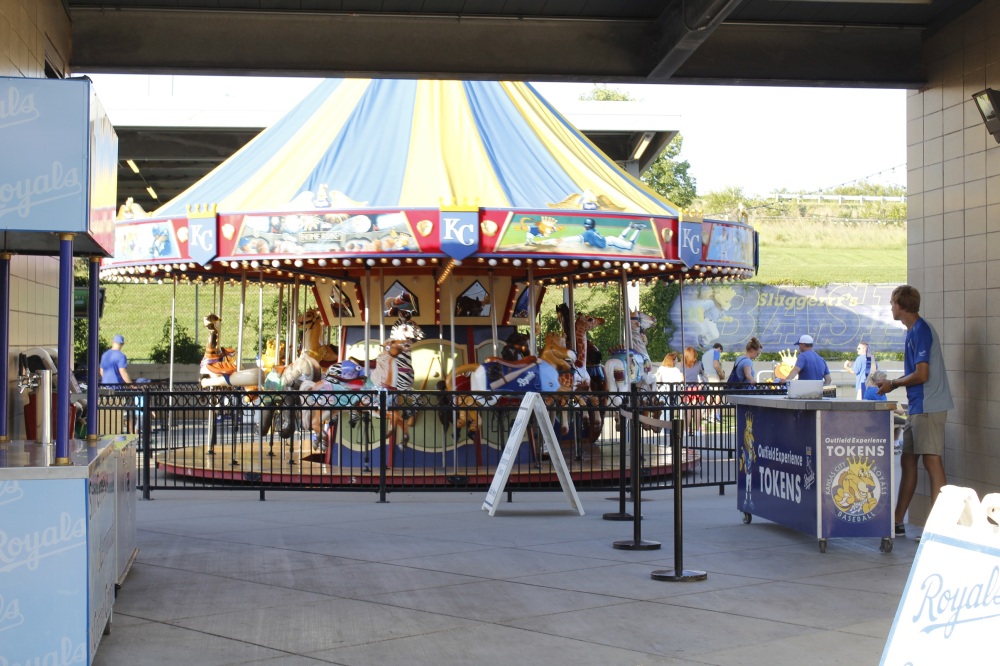 Impossible not to notify the famous water fountains that covers most of the right field wall. They are the world largest 100% private financed water fountains. Those fountains are taking doing a light and water show between the innings, after Royals home run and for the begging and ending of games. The Royals video screen was the biggest of the league when they installed it during the renovations (it lost its title to the one in Safeco field) and it has a shape that reminds us of the Royals logo. 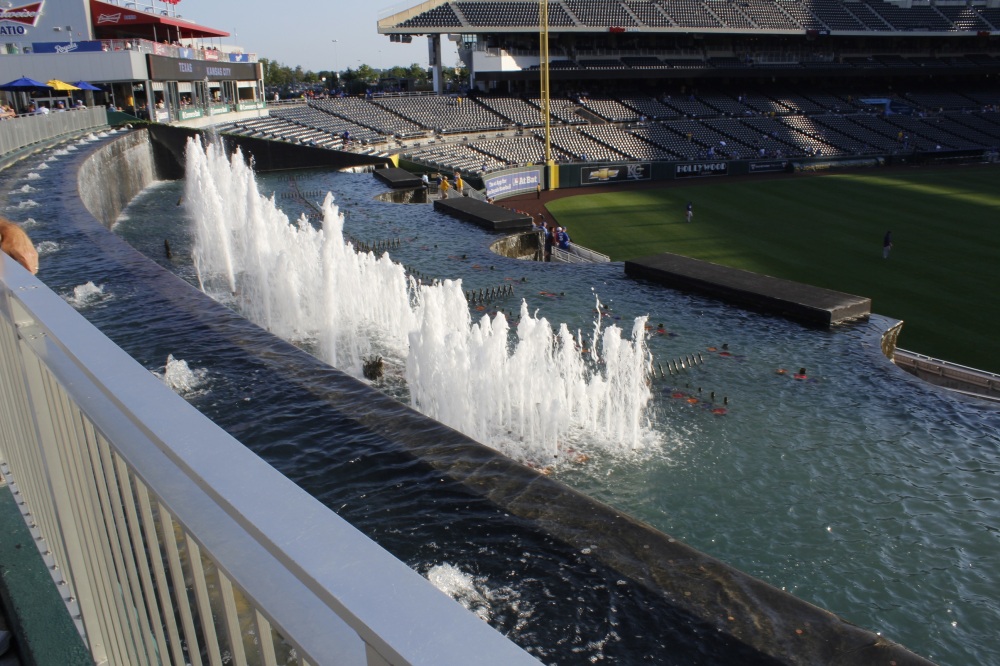 Some of the other special features are the different seating zones in the ballpark: a luxury restaurant near third base line, an all you can eat zone behind home plate and the dugout suites. Those suites are a dugout seating zone next to the actual team dugouts. Hard to be closer to the action than this! 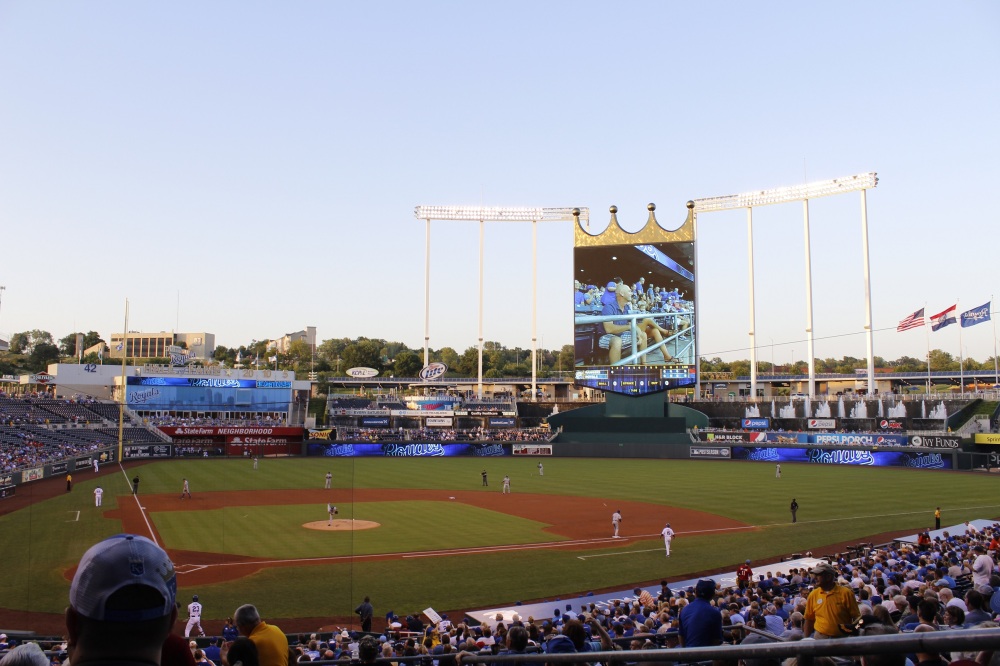 One of the greatest features at the Kauffman Stadium is the Buck O’Neil legacy seat. This seat, the only red one in the whole ballpark, was the one where Buck O’Neil would sit when he was attending a game at Kauffman before he passed away in 2006. Buck O’Neil was a player and then a manager for the Kansas City Monarchs in the famous Negro League (we will visit the Negro Leagues baseball museum the day after the game so we will talk about it in our next report). Buck O’Neil was a generous and passionate man. Every home game, someone who followed in his legacy by helping the community will be seated there and honored by the team. 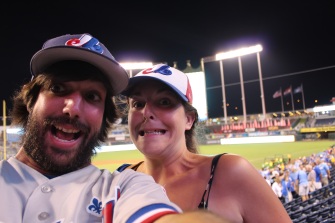 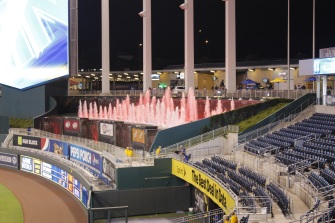 For the baseball game, we had the Royals and, for the 4th time of this trip, the Rangers! Let’s say we are getting use to their roster! The starting pitchers were Jason Vargas for the Royals and Nick Tepesch for the Rangers. Vargas played a great game: 6 innings and 2 third striking out 5 batters and not allowing one run. Alex Gordon, one of the crowd favorites hit a long home run with one man on bases in the 4th: 2-0 Royals. They will keep that lead into the 7th inning when Billy Buttler would send one man home with a double: 3-0 Royals. Terrance Gore, a young fast running player would come into the game as a pinch runner (his second game in career). He would steal third base and the bad throw would allow him to go all the way home: his first stolen base of his career and first run! He received the Gatorade shower at the end of the game! The Rangers tried to get back in the game with one run in the 8th but Greg Holland would come as a closer and 1-2-3 out to finish that game, Royals win 4-1! They needed that win to stay on top of their division. 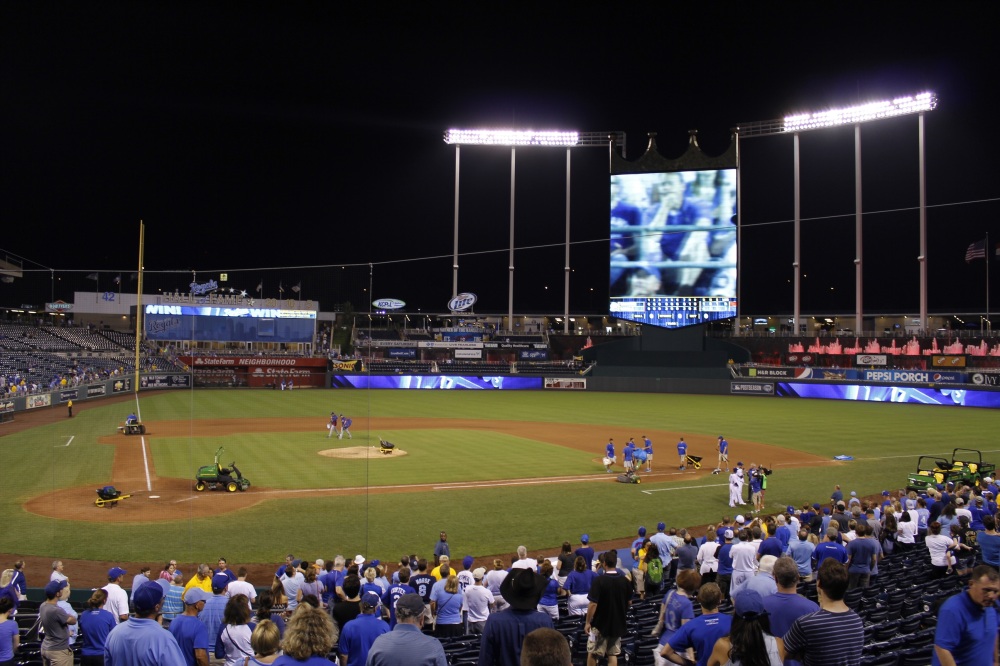 During the game, we talked with a Royals fan, Trish, which was sitting next to us. She explained us that Kansas City is a city where people are unlikely to move to. The Royals fans are usually born and raised in Kansas City or close by. She also told us that fans were not too eager to show up to games since the team hasn’t been in the playoffs for 29 years! That was the year they won their World Series. It is also one of the reasons why the team made some renovations to the ballpark so the fans would come to the game for an experience even if the team on the field is not competitive. This year they are having a good year but we were only 15,000 fans at the ballpark last night. She also told us that the Royals fans developed a rivalry with the New York Yankees: they had big matchups against that team in their good years. 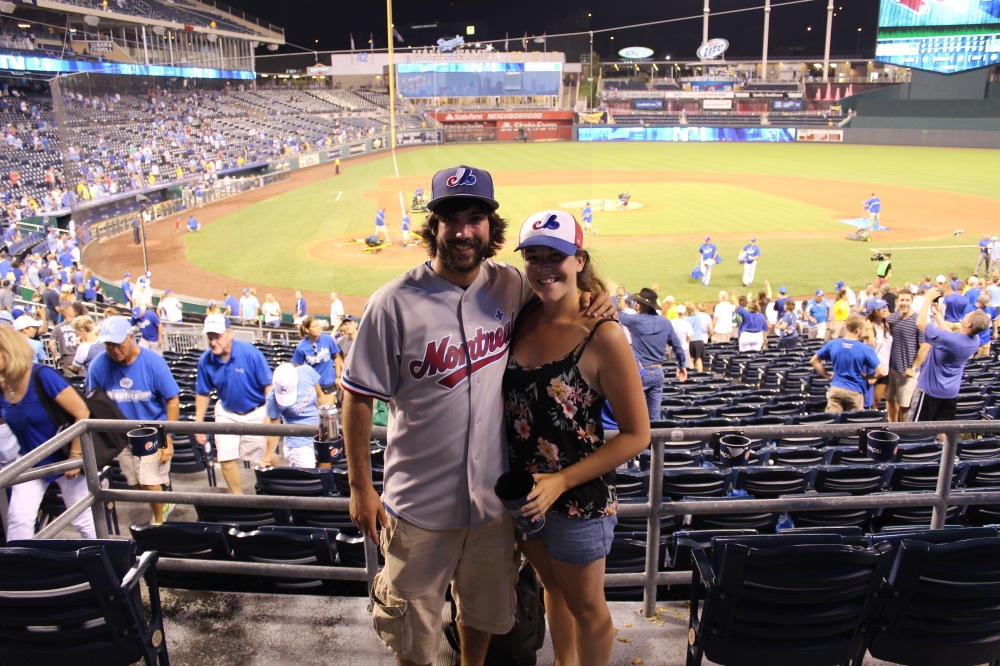 The Royals are a good representation of the United States Midwest. People are nice, we had a good atmosphere at the ballpark and we saw fans from all different ages. We could say that, for now, Kauffman Stadium is one of the best guarded secret of the league. People are not necessary thinking about going to Kansas City when they want to do a baseball trip. Funny thing, we saw many people in our hotel that were staying were traveling fans that came to the game! Fans love their players: on Thursday game you could buy special tickets to be seated in the Gordo Nation, a section where fans wear the same t-shirt and root for Alex Gordon! The Royals are not a team that will be sellout for a lot of games but the fans will always come by for a good baseball experience. Let’s wait and see if the stands are going to be filled up if the team heads to the post season. 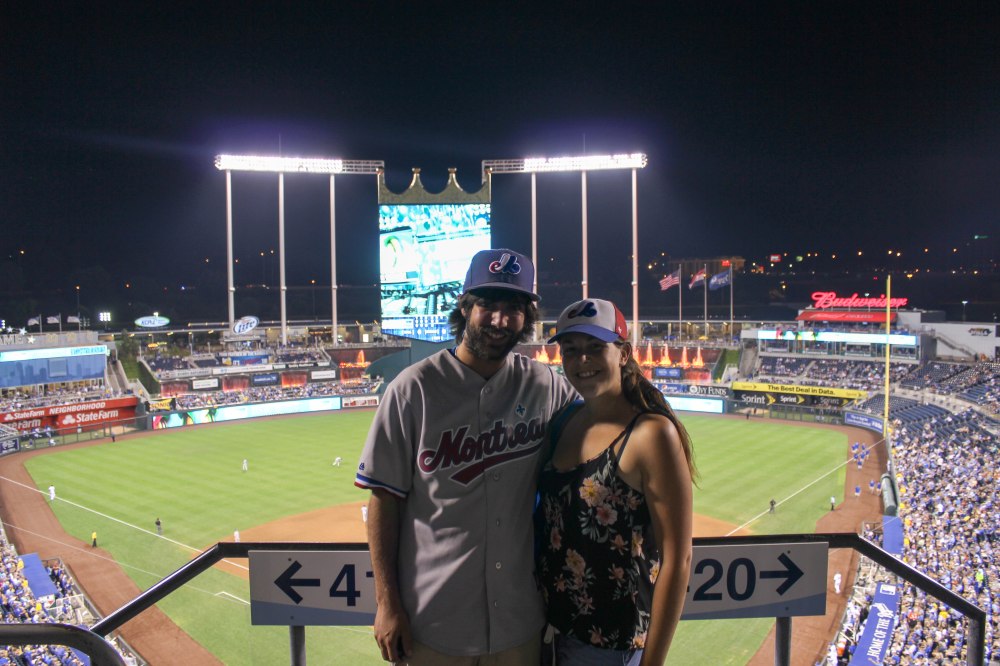 We will take a good night of sleep in our hotel and tomorrow we will visit the Negro leagues museum before leaving for Minneapolis!

P.S. did you knew that Kauffman stadium is one of the three ballparks that are named after a person (Ewing Kauffman, the team’s first owner) can you find the two others?