We left Cleveland and our new friends Sarah and Dan; we thank them for their nice and warm hospitality and for the great experience they gave us in their town. We leave pretty early in the morning to head Toronto were we are meeting some of Adry’s family.  We will be living with them for our week-end in the Canadian biggest city. We also wanted to stop in Niagara Falls. We know it sound a little bit tacky but we just needed to drive by this place! Our budget is now at his lowest so we didn’t even stop because parking was expensive so we drove by very slowly just to take a few pictures.

We were both very excited to arrive in Toronto since we were both meeting a lot of our family members and friends. We all spent the evening talking about our adventures and sharing a great meal! After 3 months away, yes we were missing all of our close ones!

On Sunday, it was the very last day of regular season in baseball. We took the public transit all the way down to the Rogers Centre in downtown Toronto. The Rogers Centre is a ballpark that doesn’t look like one! We are in a very different ballpark style compare to the Retro Classic or Retro modern ballpark we’ve seen during this trip. We have to say that when the ballpark opened, in 1989, it was a breaking innovation in sports stadium: the first ballpark with a fully retractable roof. Our friends from the south always refer to the rough Canadian weather. When we look at Minneapolis or Detroit that built ballparks without roofs, we understand why so few people would go to games early in the season since it is still very cold out there. Toronto gets to close the roof and people can shelter in the Rogers Centre for the first home games of the season.

Rogers Centre, even if it’s only 25 years old, is considered to be an old ballpark. Rogers, the company that owns the ballpark, invest in renovations in the last few years. We talk about adding TV’s all around the ballpark, new and various concessions and a large Budweiser patio that covers most of the outfield wall. I visited Rogers Centre a few years ago and I have to say that those renovations really gave a better look to the ballpark. On the other side, when you walk on the ramps to go on the upper levels, we really that we are in a 25 years old ballpark!

Also, the Rogers Centre is located in a very alive neighborhood in Toronto. It is right next to the CN tower. When the roof is open, we have a great view on this Canadian landmark. Right next to Rogers Centre is also the Round House Park and the steam whistle brewery. After the game, fans can go walk around on the Ontario Lake waterfront and enjoy a beer in the surrounding bars and restaurants. In 2015, Toronto will be host to the Pan Americans games. To be ready for this event, the City is proceeding to a lot of renovations around town. Another unique feature of the Rogers Centre is an hotel directly attached to the Ballpark with 70 rooms that gives a unique view on the field!

It was fan appreciation weekend at Rogers Centre. A lot of promotions were offered to fans to thank them for the fidelity during this season. We began off with the giveaway: a warm winter hat! Very Canadian! A 30% off blue jays clothes and apparel was also offered in the shops and a two for one on Blue jays jerseys were creating a huge line up to the different stores! Another great attraction for fans was the yard sale. The blue jays were selling autographed balls, bats, jerseys and grab bags to fans for a reduced price (still very expensive we think!). All the fans rushed to these different deals and it was very hard to walk around!

We still managed to get to our seats where we were meeting with friends and members from our families. We bought all those tickets in advance to be sure to be seated altogether. On the upper deck, we appreciated that the metal bar that we can lean on from our seats but we would’ve like to have cup holders! The seat configuration is a little weird in Toronto: it is a multipurpose stadium and the Blue Jays are sharing the ballpark with the Toronto Argonauts, a Canadian football team. We could still see the football lines from the last game. Also, the Buffalo Bills are playing regular season games in Toronto since 2008. The Blue Jays are one of the only two teams to still play on artificial grass. There is a project that says that the Rogers Centre will be replacing the turf for grass in 2018.

At the Rogers Centre, we feel the Canadian touch. We are not talking about the long line in front of the Tim Horton concession or the winter hat that were given away! We talk about how the people were nice in Toronto, how the fans would encourage the team very loudly for the whole game and how a few fans were wearing their Maple Leaf jersey! Montreal could also give this Canadian touch to the MLB but with a bilingual touch! 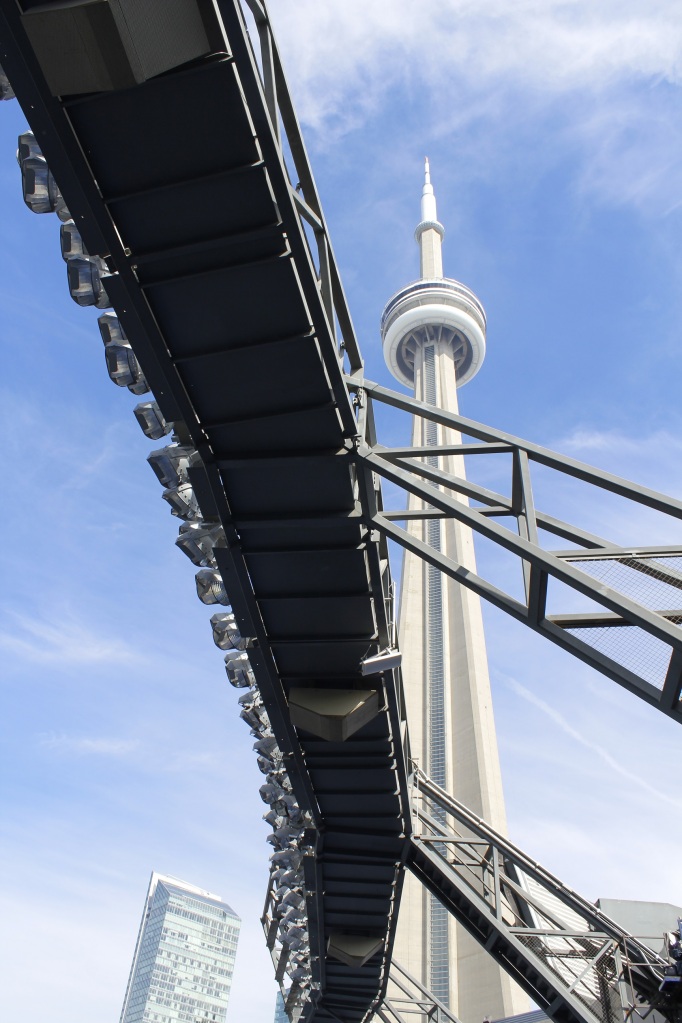 The Blue Jays and the Orioles were playing this last game of the season. The poor blue Jays have to play in a very competitive division with the Yankees, Red Sox, Orioles and Rays. The Jays finished six time with an over .500 record in the last 10 years but they couldn’t get a playoff berth in these 10 years! They have to work very hard to keep the fast pace of these teams. This year, they were up to a good start but they played badly in the second half so the Orioles got away with the division title.

Starting pitchers were R.A Dickey for the Jays and Miguel Gonzalez for the Orioles. This game wouldn’t affect any of the team’s situations. The Orioles already had clinched the division. They still dressed most of their big names for the game: Nick Markakis, Nelson Cruz and Adam Jones. We will be quick with the game resume: a solo home run from Jonathan Schoop at left field in the 5th would give a 1-0 lead to the Orioles. In the 9th, the Jays would get one man on first to keep the crown in it but an unassisted double play and a strikeout finished off the game. Final score: 1-0 Orioles, our fifth shutout in a row…

Whatever the score was, we were just happy to live that experience with our family and friends. We were also happy to be part of the atmosphere of a final game of a season. Even if their team was already eliminated, the fans showed up in great numbers to support their team and to thank them for this season. Toronto is the biggest city in Canada and home to a lot of motherhouses of big companies. This is a reason why the Blue Jays are not in danger of leaving the city. Also, their division rivals, the Red Sox and the Yankees, have a fan base that loves to travel to see baseball. That’s why a lot of them travel to Toronto to see their team play and to get really cheaper tickets out there!

One of our biggest wish, when baseball will be back to Montreal, is that Montreal plays in the same division as the Blue Jays so we could develop a great rivalry with Toronto like we already have in Hockey, Football and Soccer.

For those who didn’t know, we missed the game we were supposed to see in Washington earlier in this trip. First time, we had a rain out and second time we had car problems so we couldn’t make it out there. We are happy to announce that we will be attending the first Nationals game in the national league division series!